The Dovecot Meadow site is of special interest for its history and biodiversity.

The site is designated a Local Green Space in the South Cambridgeshire Local Plan and the Foxton draft Neighbourhood Plan. It lies at the heart of the village and many people walk through the meadow every day.

In 2003/4, Foxton Parish Council started a process to secure a lease from the landowners, Cambridgeshire County Council, to enable them to repair the derelict building, to improve its biodiversity and to secure public access to the site. 25 year leases were given in 2006. Grants were awarded by the Local Heritage Fund (a lottery fund run by the then Countryside Commission) and South Cambridgeshire District Council (SCDC), along with other local sponsors.

A key feature of the site has been the ongoing involvement of the local community in managing and improving the meadow, boundary hedges, interpretation material and the building. The Friends group, under the auspices of the parish council, organise yearly grass-cutting and lifting. In the first few years, they also monitored species to see if the management was working.

In 2020 the thatched roof was repaired and in 2021 a new interactive sign and a new gate were installed. Thanks to a Zero carbon grant from SCDC new wild flowers have been planted in the meadow.

Using old photographs, and with advice from the SCDC Conservation Officer on authentic building materials, the dovecot was restored to its former shape in 2006. Over time, all the internal nesting boxes had disappeared. The conical roof is a very distinctive feature, as is the restored 1706 plate above the door. The R.J&S 1706 on the plaque refers to the original owners, believed to be James and Susan Rayner.

Dovecots were built by more wealthy landowners to keep doves or pigeons, as a source of eggs and meat. Many have long since disappeared.  For more information, please look at Peter Jeevar’s book on the ‘Dovecots of Cambridgeshire’.

In summer 2020, the dovecot roof received maintenance from a traditional thatcher. He removed moss, replaced the distinctive roof pitch with fresh long straw, patched other areas and recovered the whole roof with fresh netting.

The meadow lies just 17 metres above sea level, on Upper Cretaceous Middle (Cenomanian Zig Zag) Chalk. There are also some superficial deposits of river terrace sands and gravel in the northern part of the site. On the opposite side of the High Street, there is a band of Totternhoe Stone, a Lower Chalk formation. The wooded ridge to the south (known as Chalk Hill) is however a different type of chalk called Holywell Nodular Chalk, part of the White Chalk subgroup. So quite a complicated geology over a small area!

Hidden within the trees on Chalk hill are some chalk pits. The chalk was dug for use in road repairs and probably for building blocks of clunch. In 1830, one of the pits was specifically dedicated for chalk supplies for the Surveyor of Highways and the local villagers. A kiln is marked on the 1903 map, suggesting prepared chalk for agricultural and building uses. It has also been suggested that Jenkins Lane, the track that crosses the meadow, was an earlier route to the chalk pits. After very dry weather, the track’s route can be distinguished across the agricultural field.

In 2005 four small holes 30cm square were dug to determine the depth of the topsoil. These produced pieces of c 15th and 16th century pottery, suggesting that the site has been occupied for at least 600 years. In 2009 a flint surface was excavated at one edge of the field which might have been a track to the Tithe barn that burnt down in 1976 which stood in what is now the school field.

The lumps and bumps were mapped and geophysical surveys conducted by a local group. (Maps and pottery shards illustrations from booklet). At least three house platforms were identified, indicating the meadow once had various buildings, and possibly ponds and gravel extraction in the northern part, nearest the High Street. Notice that it is at a lower level. Interestingly, the accounts of the Surveyor of Highways in 1786 notes a payment of £1-2s-0d to ‘Jas.Impey for digging in Jankens land’. This part of the site is also adjacent to the line of the Common Stream, along the line of the High Street.

Foxton is very fortunate to have Roland Parker’s 1975 book ‘The Common Stream’ , based on detailed research. Here are some extracts relating to the meadow site:

The earliest mention is in the 1579 land ‘terrier’ where the hollow way/track is mentioned as a ‘common lane’, through a pasture of 1 acre. In 1594, another terrier gives ‘One close called Jankens being by the Laine on the west and Robert Aylin on the east abutting upon the common streete of 1 acre, 0 roods and 0 perches. By Enclosure in 1830, this area (the eastern part of the field) had reduced to 3 roods and 11 perches, about 0.8 acre. There is further mention in a 1631 terrier of Michaelhouse Farm, belonging to Trinity College lands.

As mentioned earlier, we know the dovecot building dates from 1706 and the Rayner family. It is believed by some that the Rayner’s farmhouse, in what is now the school playing field, was demolished in 1825.

This gave an area of about 1.9 acres which has now reduced to about 1.2 acres. Jenkins’s Lane was officially stopped up in 1832, when it was described as being 148 yards long and 18 feet wide.

The documents and map prepared for the sale of Herods Farm in 1904 (plan from 1904 sale) provide further evidence of the dovehouse, described as being of brick and thatch. We are fortunate to have photos dating from 1928 and 1930 and an earlier date of the dovecot and the adjacent mulberry tree (both photos and illustrations of Rayner plaque before and after restoration)

First-hand oral evidence from an elderly resident Eileen Looker, whose family lived in the thatched cottage adjacent to the site, recalls the dovecot being used as a grain store, roofed with corrugated iron. In more recent times, the building was a stable for a horse called Hockey, and the meadow became ‘improved’ pasture for grazing. This increased the grass fertility and reduced its ecological value.

The earliest known map of the site is the 1808 Ordnance Survey (OS) map, at a scale of 2 inches per mile. This was however prepared as a draft so is not necessarily too accurate. The earliest detailed map dates from 1830, when Inclosure took place. This shows the location of Dovehouse Close, Jenkin’s Close and Jenkins’s Lane. The next map of value is the 1886 OS map (see map illustrations). 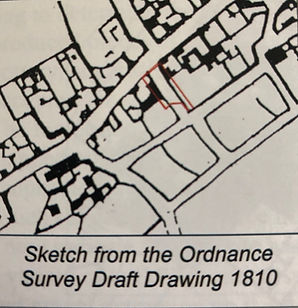 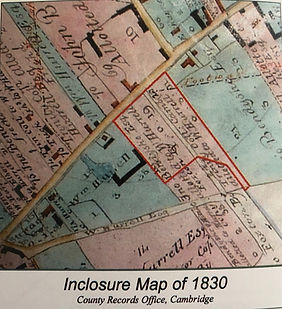 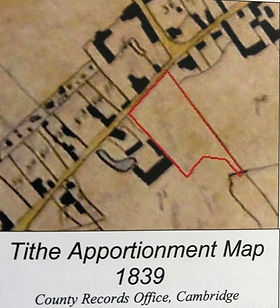 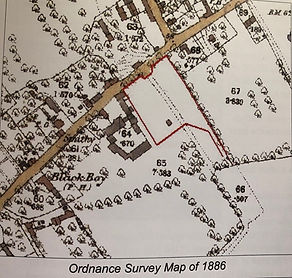